Is political science a good major? The answer depends on your interests and career goals, but political science may be a good fit for you if you have a passion for politics and want to develop a keen understanding of political institutions, public policy, and public administration.

A major in political science may allow you to work in a variety of areas, including nonprofits, think tanks, government institutions, political campaigns, media, and more.

With a bachelors in political science, you may also be suited for continuing education in a masters or PhD program. A graduate degree may offer you enhanced career prospects and an advanced understanding of key political science principles.

Is Political Science a Good Major?

Yes, political science is a good major for many undergraduate students. Jobs in the life, physical, and social science field are projected to grow at a rate of 5% in the next 10 years (Bureau of Labor Statistics).

The breadth of knowledge gained in a political science major program may prepare you for a wide variety of career outcomes. Job opportunities may include positions in politics and government but can extend into media, public relations, and nonprofit as well.

Pursuing further education in this field and gaining a masters or PhD in political science may lead to more advanced career paths. Graduate programs also tend to be more focused and streamlined on politics and government.

Earning a bachelor’s in political science may require you to complete a variety of coursework. You’ll often take general electives on topics such as history, communications, data science, research methods, or philosophy.

In addition to general electives, you will need to complete coursework that is specific to political science. Such courses may include:

Your poli sci major courses may vary depending on the school you choose to attend. In some cases, political science majors may allow you to choose between various program tracks, including international relations, data science, elections and representation, justice, and political economy.

5 Things You Can Do with a Political Science Degree

Bachelor programs that offer political science majors may prepare you for a rewarding career as a reporter, correspondent, or broadcast news analyst, a public relations specialist, a writer, a market research analyst, or a management analyst.

As a reporter, news correspondent, or broadcast news analyst, you may have the opportunity to research and investigate topics and current events. You may then provide insight and perspective to the public through various forms of media.

You may communicate through written articles, radio, television, social media, or all of these forms put together. You may also perform interviews with public officials, private citizens, and other individuals.

As a public relations specialist, you may be responsible for maintaining a business image in the public eye. This could include drafting press releases, writing speeches, and collaborating with various media outlets.

As a public relations specialist, you may work for private businesses, governments, or nonprofit organizations. You may perform crisis management, arrange interviews, and ensure that the organization is represented in the right way.

With a political science degree, you may be well suited for writing positions as a freelancer. You may also work for a business, government, or nonprofit organization.

These positions may include writing articles on current political events or providing opinion pieces on government institutions or upcoming public policy changes. Your position may also involve drafting speeches for government officials.

As a market research analyst, you may have the opportunity to conduct research in the form of interviews, public opinion polls, literature reviews, and surveys. The collected data would allow you to gain an understanding of public perceptions and opinions related to various topics.

This work may be performed in relation to products or services, but it may also be used by governments to understand the impact of policy changes within society. A market research analyst could also work for political campaigns to evaluate their standing in the public eye.

As a management analyst, you may support businesses and organizations—including nonprofits and government institutions—in the evaluation of existing policies and practices.

In this position, you may gather information about current problems and practices and perform a thorough analysis of existing circumstances. You may then be in a position to provide recommendations to create greater efficiencies and more successful practices within the business or organization.

According to the Bureau of Labor Statistics, a political science bachelors degree may qualify you for careers that offer higher than average annual salaries.

As career options span over a variety of industries, a political science major may offer you flexibility in your career path and the opportunity to gain a wide array of experiences.

These additional options may include positions in academia, such as research and teaching, or as a political scientist working for various levels of government.

If you are interested in a career in government, working for political parties, providing commentary on governmental decision-making, or working for nonprofits, then a degree in political science may be right for you.

A political science degree may also be a good fit if you’re interested in pursuing advanced education in the field, including a masters degree or PhD.

What Can You Do with a Political Science Degree?

A bachelor’s in political science may prepare you for a broad selection of career opportunities, from government and nonprofit to media, think tanks, or research.

Some positions may allow you to earn high annual salaries. For example, public relations and fundraising managers ($118,430), management analysts ($87,660), and business operations specialists ($77,420) all earn average salaries that are quite above the national average (Bureau of Labor Statistics).

A bachelor’s in political science may also be a great first step towards completing a masters, law, or PhD program in the field. Earning higher degrees offers additional career paths, including teacher, political scientist, political consultant, or lawyer.

Is Political Science a Hard Major?

You may find a political science major to be more enjoyable if you have an interest in the world of politics. It also helps if you are curious as to how public policy is developed, how political institutions work together, or how political campaigns for office work.

In some cases, poli sci programs may require you to dive into complex political theories. You may also write essays and papers on various political topics and engage in the frequent reading of academic journals.

What Do You Learn in Political Science?

As an undergraduate program, courses will include general education core curriculum coursework. These topics may include American history, language, philosophy, data science, quantitative and qualitative research methods, and communication.

Is It Hard to Find a Job with a Political Science Degree?

Finding a position with a political science degree may depend on a number of factors, including location, additional qualifications, and other applicants. Another important factor is the number of positions available and the level of growth in the field.

Several career options that you may be qualified for with a political science major are predicted to experience growth over the next several years, according to the Bureau of Labor Statistics.

What’s the Difference Between Political Science vs. Public Policy?

Public policy, on the other hand, is more keenly focused on the understanding of government policy. Public policy is made up of laws and regulations as well as subsequent actions that impact various areas of society. Public policy may be in relation to the economy, healthcare, culture, or specific sectors of society.

Is a Political Science Degree Worth It?

Yes, a political science degree is worth it for many students. The Bureau of Labor Statistics is projecting 5% job growth in life, physical, and social science occupations over the next 10 years.

Getting Your Political Science Degree Online

Pursuing a political science major may be a path for you to consider if you enjoy discussing and learning about the political landscape, both nationally and internationally.

Earning a bachelor’s in political science online may allow you to explore political institutions and gain an awareness of how different levels and bodies of government work together. You may also gain insight as to how the government uses public policy to enact laws and regulations intended to benefit society as a whole.

A degree in poli sci from an accredited university may provide you with exciting and dynamic career potential along with promising room for growth and advancement. 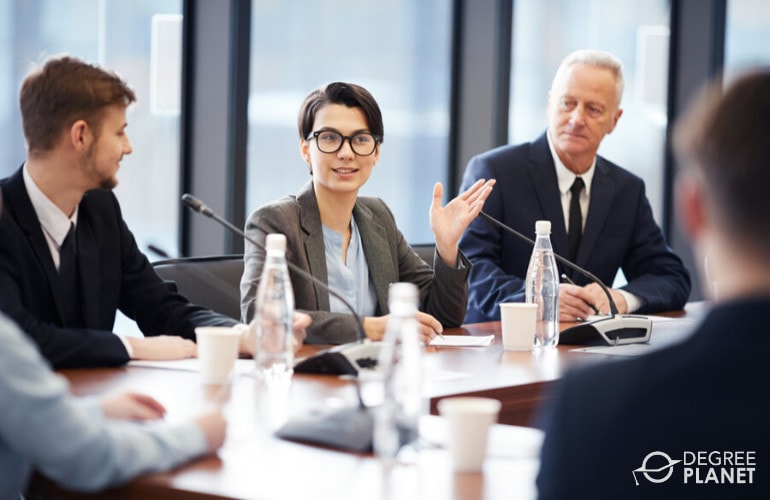 WRITTEN BY
Brenda Pyzik
Brenda earned her bachelor’s degree in sociology from the University of Waterloo, with a minor in legal studies. She obtained a graduate certificate in human resource management from Georgian College. Brenda’s focus is on employment, entrepreneurship, business, and training and development.